Throughout the summer, I’ve been in charge of the social media accounts for UW’s student newspaper, The Daily. It’s been something of a thankless job, but it’s also been entertaining in ways I never anticipated.

First, a bit of backstory: There’s a much larger newspaper called The Daily that happens to be dying. This is big news for a couple reasons. First, it’s owned by Rupert Murdoch and the News Corporation, which makes it attract controversy faster than the average digital newspaper. That ties into the second reason The Daily is big news: It’s a tablet-only experiment that’s failing. Badly. News came yesterday that the website is laying off 50 employees, a third of its staff.

So how does this affect the UW Daily? Ironically enough, Murdoch’s Daily has a Twitter issue (and it’s probably fair to say that, for a digital newspaper, this is symptomatic of its larger problems). Years ago, someone at the UW Daily grabbed the @thedaily Twitter handle, which resulted in Murdoch’s Daily being stuck with the confusing @daily handle. As a result, I see around three to five misdirected tweets per day to our account (4,650 followers) from people who are really looking for the other Daily that isn’t a college newspaper (more than 97,000 followers).

With the recent news about the layoffs, the mistweets really started heating up yesterday: 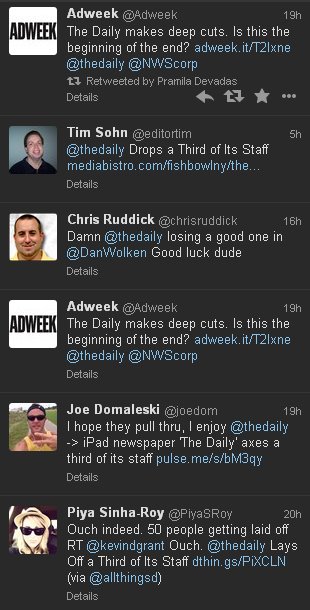 But what’s even better is when writers for The Daily do it themselves when tweeting out their stories:

Or when we get mentions from bizarre conservative blowhard Twitter accounts, like @libertydefender and his oh-so-clever profile pic:

This all shows the importance of having an intuitive Twitter handle—it must be at least a little embarrassing for The Daily to be beaten out by a college newspaper. One thing is certain, however: With Murdoch’s Daily in very real danger of being shut down, those who manage The UW Daily’s Twitter in the future won’t be privy to such amusing tweets.